If you’re here, you’re likely already in Dubai or thinking about going to the United Arab Emirates.

Perhaps for an internship.

Whatever the case, you want to know what the best dating apps are in Dubai.

Important: Just letting you know I am currently letting guys use my Profile Checklist for free. It's a simple fill-in-the-blanks code that shows you what to change about your profile. It's the first step to getting all the matches you want. Get it here for free.

Essential must-knows before you consider going to Dubai

Although Dubai has a lot going for it, the metropolis also has some major drawbacks.

Drawbacks large enough to potentially convince you to stay home.

So before we dive into the best dating apps of Dubai, let’s discuss the cities’ biggest dating downside:

That means that sex between unmarried couples should be illegal, but… …as of November 2020, consensual pre-marital sex has been legalized in the United Arab Emirates.

That said, the attitude toward pre-married public displays of affections is still a bit of a taboo.

Although not illegal, unmarried couples have been arrested for things such as hand holding and kissing in public.

Does that mean ‘normal’ European or American dates are impossible to do in Dubai?

All this means is that you want to keep outdoor physical contact to a minimum.

And get lovey-dovey behind closed doors.

This goes DOUBLY so if you’re dating someone of the same sex.

Is this secrecy not a problem for you?

Then you’ll no doubt have a great time in Dubai, if…

Up next are Dubai’s best 5 dating apps.

It’s up to you whether you want to use the one that suits you best, or divide your time and attention across all five.

Which by this point doesn’t need much of an introduction.

After all it’s as simple as: New to the online dating game? Check out my ultimate beginner’s guide on how to Tinder.

So all in all, Tinder has all you could wish for when it comes to dating.

But that doesn’t necessarily mean it’s the best dubai dating app for you.

Is time a factor?

Then you may want to use another app that:

Let’s focus on an app that attracts a slightly more specific crowd.

Although it was once more of a twin to Tinder than cousin, Bumble has been slowly reinventing itself.

The biggest way Bumble sets itself apart from the competition is that it empowers women to go first. Check the top left for her first text.

Only once she sends you the first text does the match become ‘official’.

What happens when that first text never comes?

You lose the match.

But I don’t want to set you on the wrong foot. Bumble is definitely an app worth considering.

And for the following reasons:

Although not as useful as it used to be before COVID, I’m mentioning it anyway…

In fact, it’s better in Dubai than most other places.

Because roughly 90% of people in Dubai are expats or tourists.

Expats or tourists who just came into the Arab Emirates and want to make friends.

So suppose you’re a lonely foreigner in Dubai who sees a cute Westerner walking into a coffee shop.

You could say hello and introduce yourself.

But the odds are you won’t because it’s scary!

That’s when Happn is perfect.

Because what the dating app does is show you every person who you’ve crossed paths with in a 250 meter (800 feet) radius. As well as when and where it happened.

Returning to the cute coffee shop girl. If you had Happn on your phone, you could have instantly opened it up, checked the map and see if she was also on Happn.

Does she have it installed?

All you have to do is like her and pray to the TextGods she likes you back.

With a bit of luck, you’ll get a match.

Now you have a low stress way to get to know each other.

Although we’ve gone over the 3 most popular current dating apps in Dubai, two other dating apps are steadily increasing in popularity.

And could potentially outperform the others.

So be sure to give them a try before you write them off.

Hinge is an amazing dating app that deserves more attention. 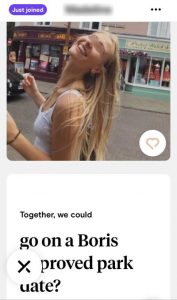 Thanks to all these features, I’m a big fan.

But there are a few drawbacks.

For more on Hinge, check out my next three articles:

Maybe this is the first time hearing of it, but Facebook has a dating app!

Which is VERY exciting considering it has 1.62 billion active users every day. Plus, it’s probably already installed on your phone.

So it’ll cost you almost no effort to try. Just the effort of setting up your dating profile.

Which brings me to the pros and cons.

For more details on Facebook dating, check out the next article:

If you don’t want to get thrown in jail, pay attention.

As I said earlier, Dubai is strict on unmarried couples getting jiggy with it.

So no funny business in public!

But what does that leave you with?

How do you behave on dates?

And if Dubai follows Sharia law, does that mean you can’t buy alcoholic drinks?

This and more will be answered shortly.

About 9/10 people in Dubai aren’t originally from Dubai.

They’re either from the surrounding areas, or Westerners.

Which means there is no concrete dating etiquette.

The women you match with are likely to be from India, Bangladesh, the Philippines, Thailand, Lebanon, Jordan, Europe and America.

(Matching a local from the United Emirates is unlikely, seeing as they’re usually quite conservative thanks to their muslim beliefs.)

Which means you won’t just be dealing with different cultures, but also religions.

And even if the person you’re dating is religious, that doesn’t tell you anything about how conservative or progressive they are.

All this essentially means one thing:

Be on your best behavior.

Just don’t forget to be playful. After all, you’re still on a date where the primary goal is to have fun! Does that mean you can’t enjoy a beer or mojito in Dubai?

Not only are the drinks expensive, the only places allowed to legally sell are specific licensed venues.

So if you want to loosen up by downing some fire water, it won’t be cheap.

Being a foreigner in Dubai will make dating incredibly…

Almost everyone in Dubai is a foreigner. Many of them are relatively new, because the majority only stays a couple of years.

Which means most people are lonely and looking to make friends.

And who better to make friends with than someone who is in the same boat?

Foreigners and tourists tend to be super receptive of their kind.

The only place where it doesn’t help you to be foreign is in court.

Judges almost always rule against foreigners because they don’t like them.

So never give police officers a reason to arrest you.

Onto the next essential dating issue.

#4: Can you kiss or sleep with each other on the first date?

A question that’s far more easily asked than answered, but…

…I do have something that can ease your mind.

Although you have to be very careful with physical contact in public, it’s technically illegal, it is also possible.

One of our current members from the TextGod Mentoring Program spent two years in Dubai and has had his fair share of dates.

What he told me is this:

“If you want to kiss on a date in Dubai, go to hotel bars with dark booths. Or go to a club. It’s possible you’ll get a warning from the staff. But you won’t be cuffed and thrown behind bars.”

Spending the night when you’re not married or family is also against the law.

But if you bring a girl up into your hotel room, or your home, nobody will make a fuss.

#5: Funny things to mention to your match

And it has nothing to do with having cereal and burgers for the same meal.

Although Dubai brunches do serve food, almost all the foreigners and tourists go there for one thing….

Almost all brunches are served in hotels who are licensed to serve alcohol.

And ‘brunching’ is slang for finding an all-you-can-eat brunch buffet that includes free drinks.

Girls love them because it’s a fun opportunity to get dolled up and get boozy.

Flight attendants and other party going foreigners will go brunching every weekend.

So sarcastically suggesting brunching as a date idea is pretty funny.

Plus, it shows that you’re an ‘insider’. Which always helps make a good impression.

#5: Some cool date ideas and inspiration

While Dubai is located in the middle of the desert, you can do far more than count grains of sand.

Dubai offers pretty much all you expect from a modern metropolis.

You name it, Dubai’s got it.

Something Dubai’s got that most other cities don’t is a large coast.

The Emirates capital is right next to it and has a beautiful beach to boot.

So if you’re not in Dubai during the scorching hot summer (where you seriously can’t go outside unless you want to get a taste of what it’s like on the sun), you can take a cab to the beach.

Which reminds me, taxis are incredibly plentiful and cheap.

If you’re going on a date at night, ask a taxi to drive you into the desert where you can go stargazing.

The desert also has other date activities, such as dining opportunities, all sorts of performances with fire, and the option to go flying over the dunes in a 4×4. Look at that purdy night sky.

That should be enough to give you an idea what to do on your dates.

Now something important that we skipped…

How to send an irresistible first message

Having the best dating apps for Dubai is great, but it’s meaningless without knowing what to say after matching.

And trust me, one wrong first message is enough to ruin the odds of seeing her.

A TextGod fan recently got this as a response to his Tinder opener (the original was in Polish, so he translated it using a screenshot creator app):

That’s not the response you want with your icebreaker.

His opener wasn’t all that bad (although it wasn’t exactly good either).

Which means that the odds of sending the wrong text are pretty big.

To guarantee you don’t send anything stupid, here’s a 3-minute video on how to send a text that makes a good first impression.

Want to guarantee your first text gets a good reply? Check out this article:

An opener is obviously not enough to seal the deal.

You need at least some back and forth to build rapport and make her excited about seeing you.

To be precise, I got you The 10 Texts That Always Work.

By now I’ve given you almost everything you need to know about dating apps in Dubai.

I just want to give you one last thing.

An opener so effective that it doesn’t just get replies on dating apps, but criminals use it to open vaults.

Silly jokes aside, the opener is stupidly good at getting replies. And you can use it on every match you have.

You can get the irresistible opener here for free. Or by clicking the gold button below.